Could this be the start of something big?  A reporter in China rolls her eyes at the Auto Speak words from their national press who were asking Fox-News like questions to a Republican:  It was a rare puncturing of the artifice surrounding the widely watched, intentionally dull National People’s Congress. The carefully choreographed event, at which top leaders make speeches and delegates rubber-stamp new policy, lends a veneer of democracy to China’s autocratic system of governance. This year, it has drawn heightened attention for a constitutional amendment that abolished term limits for President Xi Jinping.

What if more reporters started doing this.  Reporters in Russia when Putin tells another lie, or Washing DC when Trump makes fun of someone with a handicap.

Oh what a world it would be.

So, what do you think of Putin?

In other news, first there were no fish, then a few days ago this massive thing-of-a-fish washing ashore in Australia.   It was said to be 330 pounds. 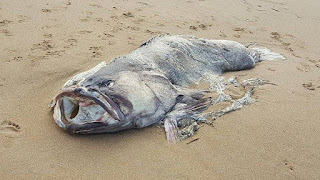 Okay, stuff like this happens all-the-time, but then a few days later, in Australia, this 68 year-old woman catches another monster fish weighing in at 130 pounds while fishing! 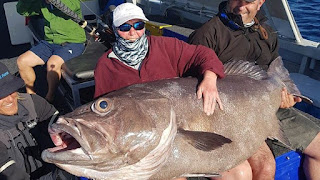