The Tower Over January 16. 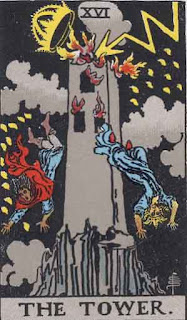 The 16th card of the Major Arcana is The Tower, which in one version of the Tarot shows both a king falling from a lightning-struck tower and the builder of this tower being killed by a blow to the head.  The Tower symbolizes the impermanence of not only physical structures but also of relationships or vocations in our lives.

On this day in 1997, Ennis Cosby, the only son of comedian Bill Cosby was murdered on a Los Angeles street robbery.  Cosby was in Los Angeles in January 1997, while on winter break from his classes at Columbia University.  In the early hours of January 16, 1997, he was visiting friends in Los Angeles and driving north on Interstate 405 through the Sepulveda Pass when, at approximately 1 a.m., he pulled off the freeway onto Skirball Center Drive to fix a flat tire. He called a friend, Stephanie Crane, who drove to meet him; she parked behind him to light the area with her headlights while Cosby changed the tire. She later testified that a man came to her window and told her, "Open the door or I'll kill you." Frightened, Crane drove away but after approximately 50 feet (15 m) turned her car around and came back. She saw a man running away and found Cosby lying on the ground in a pool of blood next to the driver's side of his dark green Mercedes-Benz. He had been shot in the head. It appeared robbery was a motive, but Cosby was still wearing a Rolex watch and had three $20 bills in his pocket.


In 2015 on this day, Bill Cosby is released from a lucrative NBC contract due to allegations of sexual assault.  The allegations had been out there for years, but only now out in the public.   Since this time we find that Cosby had a long history of sexual assault on woman from his position in life.   Most victims said that they knew they wouldn't be believed if they came out with what had happened to them.


In 2005, Donald Trump admitted to the same privileges in life that Cosby felt entitled to.  "I just start kissing [beautiful women]. It's like a magnet. Just kiss. I don't even wait," Trump said to Billy Bush (yes, a relative to the presidents) not realizing his mic was being recorded.   "You can do anything. … Grab them by the pussy. You can do anything." 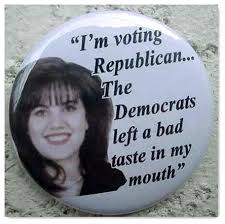 The only problem I have with this, is that the same preachers who came out saying Bill Clinton was unfit for presidency because of his "consensual" sex-act with an intern during his presidency (Monica Lewinsky),  is that the loud-mouth preachers with no real spiritual connection to anything other than the might dollar, have turned the other way for Donald Trump.

If there is a Christian hell, how do they not see themselves there?

On this day in 1981, John Lennon, famous singer from the rock group known as The Beatles, topped  the American music charts with his prophetic song titled "Starting Over."  John Lennon had been assassinated a mouth earlier outside his Dakota apartment, and believed in reincarnation.  So plan on seeing him back soon, probably someone born either on December 8th or 9th of 1980.   Conversely, the same apartment complex that the satanic 1968 film "Rosemary's Baby" was to have taken place in and some scenes were shot, was the same Dakota building that John Lennon died in front of heading back to his apartment.   Roman Polanski shot that film before his wife, Sharon Tate (and her unborn baby) was murdered by the Charles Manson idiots.   Sharon Tate's first film was "Eye Of The Devil."  Sharon Tate's mother (Doris Gwendolyn Tate) was born on this day in 1924, and after Sharon's death was influential in the amendment of California laws relating to the victims of violent crime, which would be considered in the 1997 murder of Ennis Cosby. 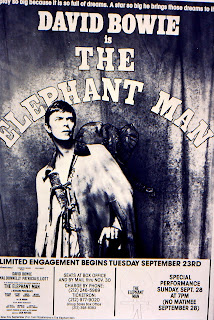 Also worth noting is that on the day Lennon was assassinated, he and Yoko had tickets to see David Bowie performing the Broadway version of The Elephant Man.  Lennon's killer, Mark David Chapman also had tickets for that show and also had David Bowie on his list of things to do that day.... Sharon Tate was born in Dallas and Mark David Chapman was born in Fort Worth....


On this day in 1971, the prosecutors in the murder trial of Charles Manson rest their case; seven days later Manson would be sentenced to life.

And the madness continues....