Virginia woman killed by her dogs and the 1966 Aliens.

It's funny what you can find out today without leaving the comforts of your home and using the internet.

First, you see the headline in your news feed:

Then you watch the news clip:

Then you visit the location for a first-hand look (google maps):

Then you do a search for killings in the area!

And you find this:

Where it is reported:


"A Goochland man and woman were killed late Sunday when their car ran off the road, according to the Goochland Sheriff's Office.

Timothy Paul Roberts, 38, was driving west on River Road West around 11 p.m. when his car went off the road near Maidens Road.
Roberts and Rebecca Harris, 46, were pronounced dead on the scene, despite wearing their seatbelts and having both front airbags deployed.
The cause of the accident is under investigation at this time."


Hmmm, possible if not probable just to die like that with seat-belts on and the airbags deployed(?)


On to the next one:

"GOOCHLAND, Va. (WRIC) — Police say a Goochland man died early Friday morning after he was found with gunshot wounds to his chest late Thursday night.
Deputies found the man, Richard Hamm, 57, lying near his home in Sandy Hook around 10:30 p.m. He was transported to Henrico Doctors Forest where he was pronounced dead shortly after midnight.
The investigation into the incident remains ongoing. Anyone with information is asked to call the Sheriff’s office 556-4349 or Crime Stoppers at 780-1000."

Not too bizarre... happens all the time.  And although Sandy Hook is only an 8 minute drive away from Goochland, this does not seem to fit the same bizzarreness as the dog murder or two people dead with seat-belts and airbags.

So you continue on and find: 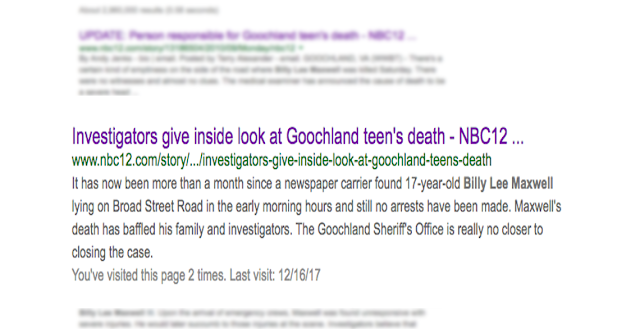 "NBC12 has learned new information in the mysterious death of the Goochland teen killed in the middle of a dark country road.
It has now been more than a month since a newspaper carrier found 17-year-old Billy Lee Maxwell lying on Broad Street Road in the early morning hours and still no arrests have been made.
Maxwell's death has baffled his family and investigators.  The Goochland Sheriff's Office is really no closer to closing the case.  The lingering questions have given investigators many challenges and loved ones nothing but heartache."

So here we have another disturbing death.

So, besides the recent death of a 22 year old woman by her two dogs, we have a car accident where the driver and passenger appear to have died from some other reason than impact, and a 17 year old found dead on the side of a road.   All three, by-the-way, open cases.

So,  mapped the three deaths to see how far apart they were and here's what we get:


A:18 Sept 2010: The possible hit-and-run was at Broad Street just east of Maidens Road. 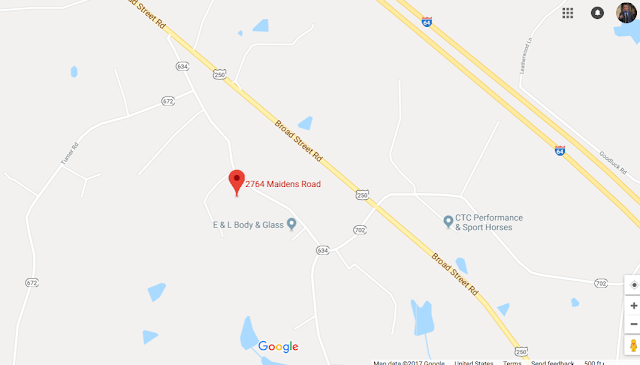 B: 21 April 2013: The car accident happened on River Road West near Maidens Road. 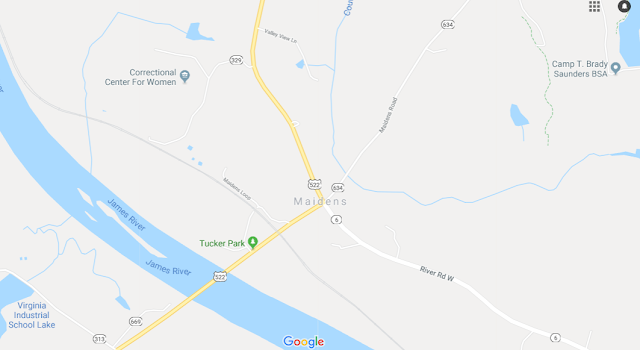 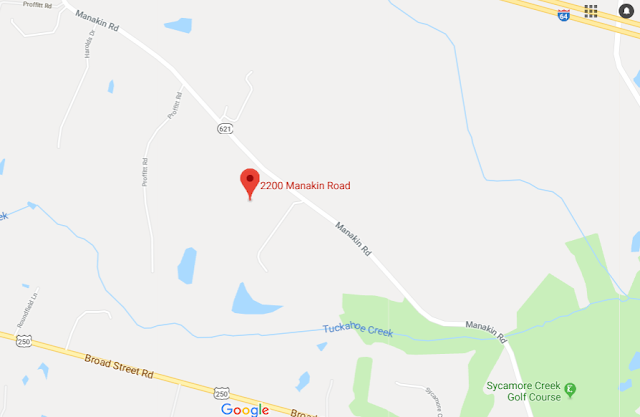 Okay, confusing I know, so let me put the three spots on one map and show you what I'm seeing: 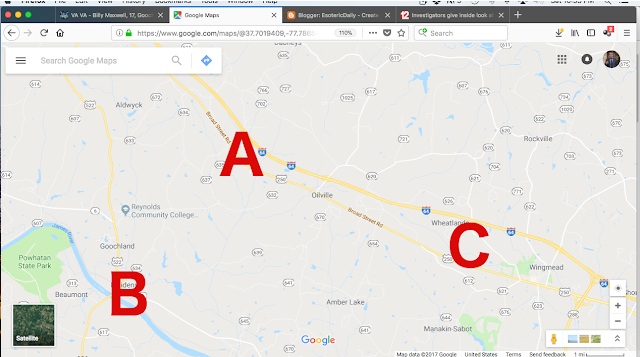 The three separate events seem to share an equal distance from each other. 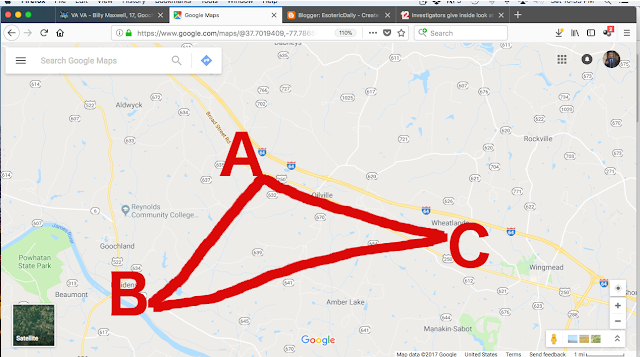 Who could stop there, right?  Not me.  And so I continued my search and interestingly enough, came across this strange incident:

If he hadn't seen it with his own eyes, Henrico County Sheriff A.D. "Toby" Mathews said, he might not have believed it.

On a bright moonlit night 33 years ago this summer, Mathews said, he saw a large unidentified flying object hovering silently near his Varina farm. He suspects whatever was inside the mysterious craft was responsible for snatching and snuffing the life out of his dog.

"I really saw the thing, I really did," Mathews, 65, said this week when asked to respond to talk of his close encounter. "And I've never seen anything like that since then."

Mathews said he never publicly disclosed what he saw until now because he felt no one would believe him. He talked about his UFO experience this week after The Times-Dispatch learned that he had told the story three years ago to his former chief deputy during a Christmas dinner in Williamsburg.

Mathews, who's fond of sharing personal stories about his life, was candid about his UFO experience, which he noted occurred during a time when such sightings were reported with some regularity by Richmond-area residents.

During the spring and summer of 1966 --when Mathews said he saw a saucerlike object hover over a cornfield near his farm and then disappear in a flash -- more than a half-dozen people, including three other Richmond-area police officers, reported spotting similar objects hovering over the city, Henrico and

Goochland County, according to news accounts in The Times-Dispatch and The Richmond News Leader.

One Richmond patrolman told The News Leader that he chased the UFO in his patrol car.

close. Mathews, a two-term sheriff, is running for the Varina District seat on the Henrico Board of Supervisors.

With just four days left until the general election, Mathews this week recounted his UFO experience with little hesitation. He said it occurred Aug. 9, 1966, after he returnedhome from a psychology class at the former Richmond Professional Institute (now Virginia Commonwealth University). He was a road sergeant with Henrico police and was living alone at the time at his farm on Charles City Road in the county's Glendale area.

At about 10:30 that evening, Mathews said, his German shepherd, tied to a chain out back, began barking loudly, so he went outside to investigate. After turning him loose, Mathews said the dog, which he had acquired only three weeks earlier, ran to the edge of an adjacent cornfield. He was astonished at what he saw next.

"I happened to look up and there was that UFO right above the cornfield, it was just hovering right up above the power lines" about 200 feet in the air, Mathews said.

The craft, which Mathews described as white and about 30 feet in diameter, made hardly a sound and emitted no light. The object was about 4 or 5 feet wide at its widest point, which was in the middle, he said.

"It was just like the ones you see on TV," Mathews said. "It was a bright moon that night," so he got a good look at it.

Mathews said he ran back inside his house to get a flashlight, and when he returned and shined it on the craft, the UFO turned slightly, emitted a burst of light and "took off like a bullet, just tremendously fast."

Mathews said he rechained the dog and went to bed after the craft disappeared, and he got up about 5 the next morning and went out to check on his dog. He let it run loose for a few minutes, as was his routine, but the dog didn't come back.

Mathews said he canvassed the area, but the dog was nowhere to be found. When he returned home, he was startled to find his dog lying motionless in the middle of the road just beyond his circular driveway. He was dead.

"He didn't have a mark on him -- no blood, no singe [marks], no nothing," Mathews recalled. "It looked like he almost was sleeping. And whatever killed him, they had taken his chain collar off" and dropped it on the shoulder of the road. "I couldn't believe how it got off him like it did."

Mathews said his neighborhood in those days was remote and largely devoid of traffic at that hour. "I didn't see any cars come through at the time." Mathews said he assumed that his dog was killed by whoever, or whatever, was in the UFO. "The dog let me know that they were there," he said.

The dog's death remained a mystery, Mathews said. He buried the shepherd that morning in a meadow on his property.

Mathews said the city officer who saw a saucerlike object near the State Fairgrounds a month earlier had urged him to notify the news media about his encounter, but Mathews resisted. Mathews was living alone at the time, and there were no other witnesses, he said.

"I wasn't frightened by it; it was kind of awesome," Mathews said of the object. "Of course, back in those days I was still in the military reserve, and it didn't appear to be any type of military craft at all. Because No. 1, it wouldn't have done what it did" had it been a known military aircraft.

In December 1996, Mathews told his story to then-Chief Deputy Patrick Haley and his wife, Brenda, during a Christmas dinner party at the Seafarers Restaurant in Williamsburg.

"The way he told it was so specific and he was dead serious, he wasn't joking," said Haley, who now is deputy coordinator of law enforcement accreditation for the Virginia Department of Criminal Justice Services. "We talked about this for months."

Haley, who resigned abruptly after about a year as the department's No. 2 officer because he believed incompetent leadership and dishonorable management practices by Mathews created a host of problems with the sheriff's office, recalled Mathews telling him a slightly different story about the encounter.

Haley said he remembered Mathews saying the craft had landed and emitted some kind of strong "pull" that drew him toward it, although he managed to resist it. Haley also recalled Mathews saying that his dog, after it was found dead, appeared to have been burnt or singed.

Mathews, however, said those things didn't happen. And he shrugged off how his strange encounter may be viewed by the public.