The Nobel Prize Happens and so does war.

And the Oscar went to Elizabeth Taylor for her work in Butterfield 8, a film so dreadful even the actress herself dismissed it as "a piece of obscenity."  A Grammy was given to Baha Men for "Who Let the Dogs Out," a song that asked the probing question "Who? Who? who? Who? Who?" Madonna, whose portrayal of Eva Peron came off stiffer than the corpse of Argentina's once celebrated first lady, nevertheless won a Golden Globe for her "acting" in Evita.  Yet no matter how colossally ill chosen the award winners were, nobody (except perhaps the worthier competition) was too adversely affected by these aberrations.  "That's entertainment," as the saying goes.

The Nobel Prize, however, is a different matter entirely.  The award, given every year on December 10, is supposed to recognize the very best in human accomplishment in various fields of endeavor.  Giants like Einstein, Mandela, Churchill, and Curie have all been named Nobel laureates.  But so have some vastly less deserving fold who, by virtue of winning the Nobel, gave the prestigious prize a bit of a black eye.  Among them:

Fritz Haber, 1918, chemistry, for the synthesis of ammonia from nitrogen in the air.  Thanks to Haber's discovery, which allowed for the development of industrial fertilizers, the world became far better fed.  Yet this immensely beneficial contribution to mankind was made well before World War I, by which time the chemist was redirecting his creative energy toward something his own wife condemned as "perversion of the ideals of science" and  "a sign of barbarity, corruption the very discipline which ought to bring new insights into life" -- the annihilation of Germany's enemies on the battlefield with poisonous gas.

Antonio Egas Moniz, 1949, medicine, for pioneering the lobotomy.  Besides the fact that this radical brain procedure turned many patients -- including President John F. Kennedy's sister Rosemary-- into near zombies, there was nothing particularly inventive about the drilling holes into the skull and shoving in an instrument to disable the frontal lobes.  n fact, it was kind of medieval-- not like, say, creating the artificial heart (a feat for which Robert Jarvik was egregiously overlooked by the Nobel committee).  And when a place as oppressive and cruel as the Soviet Union bans lobotomies as "contrary to the principles of humanity," as it did in 1950, that might be taken as an indication that this monstrous procedure was bad medicine indeed.

Yasser Arafat, 1994, Peace Prize (shared with Shimon Peres and Yitzhak Rabin of Israel).  Yes, it's true that one man's terrorist is another man's freedom fighter.  And certainly the Palestinian people have had plenty of legitimate beefs with Israel.  Yet when the massacre of innocents--coupled with hijackings, kidnappings, political assassinations, and other mayhem--becomes the paramount means to an end, as it did for the Palestinian leader, it tends to make a mockery of the Nobel Peace Prize--especially considering the fact that Mahatma Gandhi was never awarded one.

Myron Scholes and Robert Merton, 1997, economics.  Less than a year after receiving their prize, "for a new method to determine the value of derivatives," as the Nobel announcement read, the laureates' esteemed hedge fund, Long-Term Capital Management, lost $4 billion in six weeks.
(Bad Days in History, Farquhar, Michael).

No conversation of the Nobel Peace Prize is complete without mentioning the year 1978.  For that is the year President Jimmy Carter somehow got Mohamed Anwar al-Sadat and  Menachem Begin together to talk and Egypt became the first Arab country to officially recognize the state of Israel. In return Egypt gained control of the Sinai Peninsula.  Mohamed Anwar al-Sadat and  Menachem Begin
both shared the Nobel Peace Prize that year.  It was one of the few serious hopes for peace I have seen in my lifetime.  But then.... 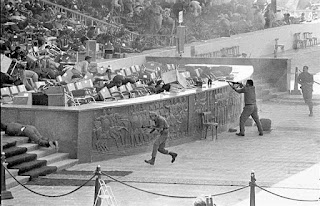 On 6 October 1981, Sadat was assassinated during the annual victory parade held in Cairo to celebrate Egypt's crossing of the Suez Canal.

The assassination squad was led by Lieutenant Khalid Islambouli after a fatwā (death sentence) was approved by Omar Abdel-Rahman, "The Blind Sheikh," an Egyptian Muslim leader who was arrested and convicted for the first World Trade Center bombing in February 1993.

In the year 2009, on the anniversary of the signing of the Universal Declaration of Human Rights, President Barack Obama received the Nobel Peace Prize.

In his acceptance speech, the president thought it wise to pay homage to war: "times when nations will find the use of force not only necessary but morally justified."

Four and a half centuries before, when the Nobel Prize did not exist and evil resided in countries not with oil but with gold and silver, Spanish jurist Juan Ginés de Sepúlveda also defended war as "not only necessary but morally justified."

Ginés explained that war was necessary against the Indians of the Americas, "being by nature servile men who are barbarian, uncultured and inhuman," and that war was justified, "because it is just, by natural right, that the body obey the soul, that the appetite obey reason, that brutes obey man, women their husbands, the imperfect the perfect and the worse the better, for the good of all." 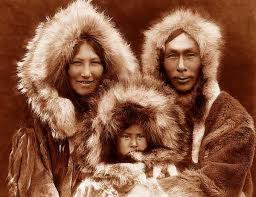 On or around this date each year, Inuít hunters of the Arctic coastal regions of North America perform the centuries-old December Moon Ceremony.  The observance begins with a series of purification rites, followed by a full-moon propitiation ritual for the souls of the animals that the participants have hunted and killed during the prior year.

Debunked:  Were Ringo Star and Yasser Arafat the same persons? 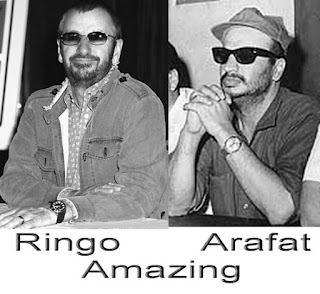 No, but they both lived on Beatles somewhere in their lifetimes.