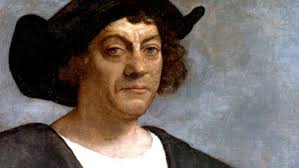 Christopher Columbus received the warmest of welcomes when he first arrived in the New World that he immediately claimed it for Spain on October 12, 1492.  The native people of that Bahamian island were so excited to see him that they swam out to his ship to offer greetings.  The explore, in turn, was much impressed by their gentle hospitality:


"They...brought us parrots and balls of cotton and spears and many other things, which they exchanged for the glass beads and hawks' bells.  They willingly traded everything they owned... They were well-built, with good bodies and handsome features... They do not bear arms, and do not know them, for I showed them a sword, they took it by the edge and cut themselves out of ignorance.  They have no iron.  Their spears are made of cane."

Columbus also saw the vast potential in the natives he met that fateful day:  "They would make fine servants...  With fifty men we could subjugate them all and make them do whatever we want."

And so he did.

Meanwhile, back in Rome, this day was sacred to Fortuna Redux, the goddess of successful journeys and safe returns.