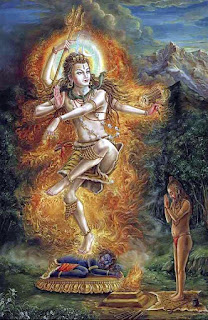 The Eka Dasa Rudra (an eleven-week-long Balinese festival consisting of thirty ceremonies) is held on this date approximately once every one hundred years to restore the balance between the forces of good and evil.  The festival, which is ancient in origin, reaches a climax when thousands of pilgrims gather at the volcano temple to observe animal sacrifices made to appease the god Rudra.

The divine ones we acknowledge during the two weeks around the spring equinox -- Cybele, Inanna, Ishtar, Isis, Aphrodite, Minerva, Athena, Demeter, Persephone, Dionysus, ST. Patrick, Heimdall -- are connected with death and rebirth.  Before Julius Caesar made January the first month of the year, the new year arrived with the spring equinox, so we have story after story of death and a stay in the underworld, story after story of resurrection.  The Aramaic word for resurrection means "to get up again."  I like the simplicity of that.  We get up again.  After death we get up again, just like we get up every morning.  It's not such a big deal.  We throw back the covers and get out of bed.  Like the vegetative deities, we arise to a new life.  When spring comes, the year also gets up again.