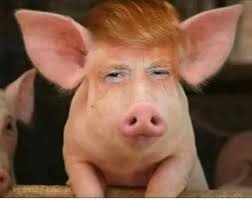 On February 23rd the last festival of the ancient Roman year (the Terminalia) was celebrated annually in honor of the god Terminus, a deity who ruled over boundaries and frontiers.  During the Terminalia, neighbors whose lands were divided and protected by Terminus would gather together and pour libations of wine, honey, and the blood of sacrificed pigs on their stone boundary-markers.

Speaking of pigs, a member of the Suidae family, often known in the United States as a hog, the Pig has a very mixed reputation in world mythology, as both sacred (e.g. in ancient Rome) and unclean (e.g. Hebrew and Islamic law).  distrust of the pig passed into Christian lore partly from the Judaic tradition and partly from the biblical episode in which Jesus drives a legion of unclean spirits into a herd of swine.  In many societies the reasons for avoiding pig-meat are bound up with sympathetic magic rather than religious beliefs; Zulu women avoid eating pigs lest they produce ugly babies.  The Celts had no such qualms, and among Manannan's greatest treasures were two self-perpetuation pigs, one forever roasting while the other forever fattened itself to take its place.

In popular proverb lore the pig represents low animal nature and specifically greed, ignorance and filth.  It is seldom featured in animal tales, and even more rarely as a trickster or a figure with intelligence and wit.  In a Walloon (southern Belgium) tale also found in Catalonia and among Native Americans however the pig is caught in an apple tree by the wolf and saves himself by dropping into his persecutor's mouth, not the ham that he has promised, but a thorny branch that splits the wolf's gullet.  In the popular European nursery tale of the Three Little Pigs, the three build houses of varying strength -- one of straw, one of week and one of bricks.   Finally all the pigs take shelter in the last house.  In some versions the wolf is killed when he tries to enter through the chimney and either falls or is burned by the fire.

Of course, there is the Chinese year of the pig, of which we are in: 2017.  Wouldn't you know it:
Pigs are not considered smart animals in China.  On the positive side, they are regarded as wealth.

Disclaimer:  Here at EsotericDaily.com we decided to go political when we realized Sir Donald Tic Tac Trump is still running his campaign of divisiveness and ugliness, which is so,  well, oink! oink!