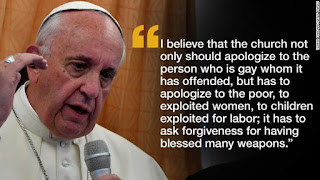 In case you want to read it all, here it is:

(CNN)If you're a Christian who exploits people, leads a double life or manages a "dirty" business, perhaps it's better not to call yourself a believer, Pope Francis suggested in a homily on Thursday in Rome."So many Christians are like this, and these people scandalize others," Francis said during morning Mass at Casa Santa Marta, according to Vatican Radio. "How many times have we heard -- all of us, around the neighborhood and elsewhere -- 'But to be a Catholic like that, it's better to be an atheist.' It is that: scandal."