Not since Rod Stewart sang, "Come upstairs to my place and I'll show you my Tarot card," have the cards been calling me to do a reading.  And, instead of doing it for myself alone, I'm doing it for the USA.  Or, in hindsight, I would say, the white witches, good witches, kind souls, liberals, lefties, whatever you choose, for never in our country's history has the evil of bigotry, greed, and racism had so much power.  And they are tying to put us back into the dark ages, but, don't fear for the white light of goodness will win out.  It always does.  Still, in my reading I do see a rough 2017 ahead.

To being with, when looking at 2017 in the context of numerology, I am a little freaked-out because of the Donald Trump factor.   There is no denying that whatever Donald Trump is doing,  he is doing it for himself.   For his bottom line.  And anyone who gets in his way will be destroyed as weak.  It is his language and view of everything.  And from a numerological standpoint, 2017, when you add them up: 2 + 0 + 1 + 7 = 10 and that is distilled down to: 1 + 0 = 1

On its basic level, "1" stands for beginning.  According to Astrology Club,  1 symbolizes leadership and can get a lot done. At worst, number 1 energy of itself can be aggressive, cruel and even violent due to its pointed, narrow focus and approach....

And there you have what we are facing in the year 2017:   at best, 1 symbolizes the new presidency of Donald Trump and how it will bring leadership to the world, on the other-hand,  it could mean cruel and violent behavior.  Unfortunately, the cards say the latter.

According to Astrocycles.net, 2017 will be fine for awhile, but then there will be a market crash in October 2017.   Here at EsoterciDaily.com, however, we believe they have this wrong and that the "regrouping" that they see in the stars for October 2017, is actually the impeachment or possible death of Donald Trump, and so any market problems will be temporary.  A day to watch is the 3rd of August 2017, for at that day Uranus goes retrograde at 28°32' Aries.  So, what happens on the 3rd of August 2017 is tres, tres, importante, and will clue us in to the October changes certain to come.

Now, onto the Tarot.  As you will see, the year begins with the Major Arcana cards The High Priestess and Wheel of Fortune.  In any reading, 2 Major Arcana cards mean:  Shut The Fuck Up And Listen.   And, so there is no doubting January and February will be "Hugh."  The 12 month reading always has The Fool and The Devil, so hold on to your saddles.   It is going to be turbulent.  The interesting stream of cards that is running thought the year is Cups, which, is concerned with love and emotions.  So, on one hand we are looking at power, and on the other, love.  I do believe 2017 is going to be the year of Love v. Power, and as in any good Hollywood film, love will win.

So, with the reversed High Priestess, I would say, we as a country are expecting things to come too easily and to not give up when they don't.  The impulse is to hide or run, but don't.  We need to stay strong, be out there, be seen, be heard.

We are more than just a voice in the dark.

Luck isn't on our side right now.  Don't get embroiled in anything we will regret.  Stay constructive.  Stay connected.  As the group Crowed House sang, "Don't Let Them Win."  The dreams not over, although it most certainly will seem so this month.

Compromise brings happiness.  All we can do at this point is watch, patiently, don't get upset, let it happen, let it flow.  It is certainly going to feel like the Ides of March, but we will prevail.  Love does prevail.  We must postpone arguments until they open their minds; which is most certain to come soon.

Don't give into political powers on the rise.  Hurt feeling could steer us down the wrong path.  Open to new friendships, maybe even newly evolves who are finally seeing the light.  Stay together, stay strong, we will overcome.

May: Page of Cups

Be open to alternatives and prepared for a change of plans.  The good news is we are starting to see the change coming.  The positive love change which has been screened by the hate and greed that seems to be controlling us.  The veil is fading away, the monster's eyes have been revealed. It's a glorious day in Hollywood.

Although you probably already know this, fight for and hold onto what you believer.  Results from our hard words are finally starting to show.  It is June, the enemy is beginning to change, less boisterous than in months pass; almost, well, lovable.  Enjoy the Jun 21, Solstice, it will mark the change.

Don't be intimidated.  Allow them to lash out, to say what they will.  The evil power is being released, the white light is coming, but for now it is behind the darkest of clouds.   And, though the worst is not over, the suffering is, for this is truly the month we can say, "Aquarius" has risen.  Rejoice, laugh, have a drink.

Matters are proceeding as planned.  This is the month is shows, the month the tide turns.   Kill others with kindness and try not to be too happy, for the fight is not over, now the bright light must return to all and we must help carry its message.    The new journey has begun.

People are being generous to others again.  The light is showing.  Stay away from shop talk and try not to worry about finances.   Enjoy the kindness of strangers, you deserve it.

With new leaders comes new problems.   Be kind, be soft, don't let disappointment get in the way of happiness.  Beware of overindulgence and depression, we've come so far and yes, this is all there is to a circus.

A break from the problems of the last ten months are here.  Do something nice for yourself, let bygones be bygones, enjoy the now.   Isn't life great again!

But the war's not over, nor will it ever be.  Good will always prevail, but at what means.  Just look at the last year, what a change, but we made it!  Truth made it!  Love made it!   To achieve security and happiness we got to plan our goals now.  Knowing when to say "no" will help us maintain our integrity.

By tvboogie - December 31, 2016
Email ThisBlogThis!Share to TwitterShare to FacebookShare to Pinterest
Labels: Predictions

Movies have always been the greatest source of entertainment in our lives. This Movie is an upcoming action spy comedy film.
The Movie Download and Online Watching free everything for you...
For More....
Plz Visit :
judwaa 2 songs
spyder movie songs

Yes, "Make America Great Again" is a Nazis Slogan and everyone knows it.

February 20th, on this day in 1939, 20,000 people celebrated George Washington's birthday at Madison Square Garden in New York.  It... 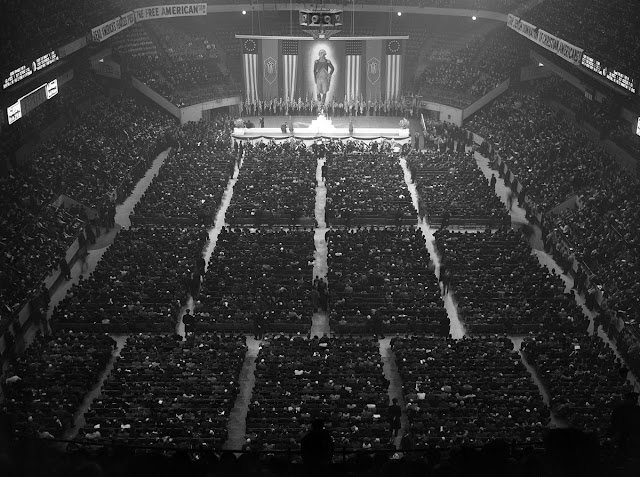