Thinking of a Woman Buddha as the USA slips back into the Dark Ages. 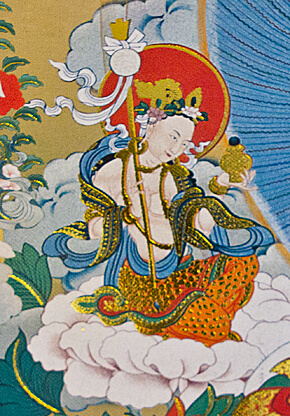 If you've never heard of her, let me tell you she was a liberate woman monk long before it was acceptable -- well, kind of acceptable considering the rollback of a woman's choice to say what happens to her body being threatened in the USA Supreme Court as we speak which has always been about politics and not life.

Back to Mandarava: She was a princess born into wealth, but overcame that by standing up to her parents when they tried to marry her off into an arranged marriage.

"Mandarava don't play that shit! (I paraphrase)" she said, and so made her escape.

Of course this pissed her Alpha Dog father off and so he did what any loving father would do:  he had her thrown into jail.

Seeing her suffering as an opportunity -- as all good Buddhist do -- she simply converted 800 woman to the Buddhist Mystic Law -- "800 woman in prison?" apparently marijuana was a crime back then too -- and they became a Dharma force to be reckoned with because her father was so overwhelmed that he gave her her freedom and she fled with the nuns to continue her life as a Bodhisattva.

When she had completed all of her beneficial activities, it was time for her to depart from this world. Her body became invisible and then manifested as a sphere of light filling the entire sky.  She departed to the Akaniṣṭa Paradise of Padmavyūha and arose as the supreme secret consort of primordial wisdom.

On a final note boys and girls, we are all Bodhisattvas, some of you just don't know it.  A Bodhisattva is a person who has achieved Buddha enlightenment in a previous life, however, instead of accepting Nirvana, she/he comes back to help others find enlightenment, like me.