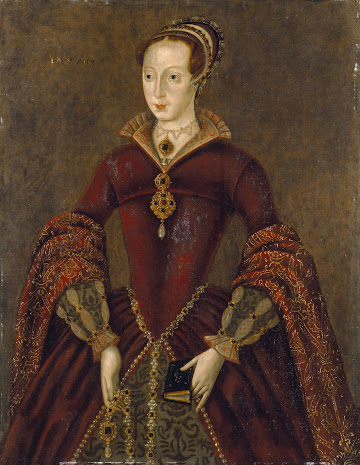 Lady Jane Grey, the Queen of England for just thirteen days, is beheaded on Tower Hill on this day (February 12), 1554.  She was barely 17 years old and of the Jesus Christ (Tutor) royal blood -- so some say.  The Duke of Northumberland, had taken the precaution of marrying one of his sons, Lord Guildford Dudley, to Jane, ensuring his place as the power behind the throne.  Dudley, however, had not reckoned on the steely determination of Mary to claim her inheritance as Queen, nor on the power of the common people who backed her.
Yes, another example of why you shouldn't force things, and should let them proceed naturally.  The Duke of Northumberland tried to obtain power by having his son marry into a kingship.   What actually happened was his son was beheaded on this day and the Duke of Northumberland was now an enemy of Queen Marry.  Ouch.  Should have accepted things as they were.
This brings me to today's post, "When You Attempt to Force an Outcome, the Universe Will Resist you."  It is the natural law.  If you pause and look at it you'll see it is true.  What we resist persist, and what we force, will remorse.
Which brings me to the ending of today's post, for you see, I am forcing this outcome to be interesting and intelligent.  It won't happen.  On to another day when something comes more naturally.  When the universe is ready to provide.
Oh, since I am talking about February 12th, historically, on this same day in the year 1663, some 109 years after Lady Jane's beheading, the infamous clergyman Cotton Mather would be born in Boston, Massachusetts.  Yes, the daemonic preacher who's writings and sermons would give us the hysteria of the 1692 Salem Witch-hunt which would result in many more Lady Jane type deaths.