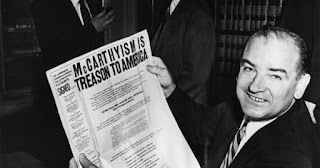 McCarthy knew he was a monster.

The election is over, yet, Donald Trump refuses to acknowledge his loss.

What country is this again?

Every morning I chant for love and peace for the country; since the election I've been chanting for truth.  Seems we've gotten a shitload of truth from Donald Trump and the Republican party: the truth that they don't deserve to live in the United States of America, they deserve their own country where they can live with White-Minded people.   I say "White-Minded People" because they don't care what color or nationality you are as long as you take their shit and believe their way of believing.  You know, that Jesus Christ was the only White Guy with Blue Eyes to be roaming around Israel 2100 years ago, and that the gazillion-dollar deficit in the USA is not from crazy war spending and tax-cuts for the rich, but from unwed mothers receiving food stamps.  And, most disturbing of all: Donald Trump is a Godly Man; that's right, the guy who purchased a Porn Star for bragging rights is a godly man.

I have a message for the Neo-Con, Right Wing, Fascist: your days are numbered and you know it.   Once Donald Trump and his enablers are gone you will not have power again for a long time.  The last time you had this power you gave us "McCarthyism," for those of you who don't remember McCarthyism, it was when the Republicans called anyone who didn't see things their way Communist.  Today we call that period "McCarthyism," just like in fifty years from now we will call this time "Trumpism," and all the enablers like Mitch McConnell and Lindsey Graham will lie and say they fought against it.  They didn't.  Here in Texas we call them "Rhinestone Cowboys." 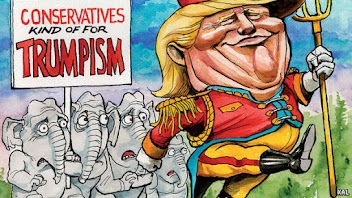