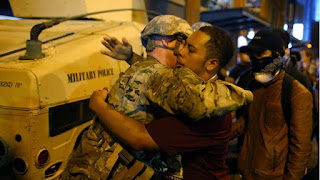 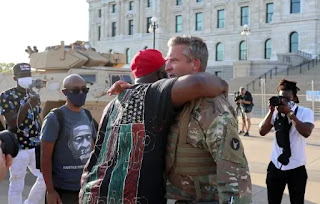 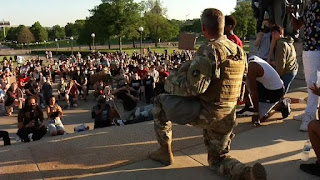 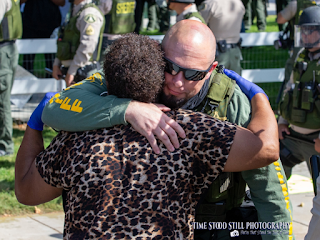 The world is changing, and the change is good.


That thought came to me this morning in my Buddhist chants/prayers.  As those of you who have been reading me know, I'm a Nichiren Buddhist and proud member of the SGI.  We're a humanistic organization that is working for peace and security for society of the world.  We believe our lives are inextricably connected, and that we cannot enjoy true happiness and security while others are suffering or imperiled.  We don't push our faith on others, but we do chant that the world will come together as it is today with the peaceful marches.  And this brings me to today's post: peaceful, loving, change is coming! 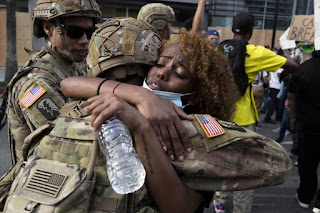 The signs are everywhere:  Trump has tried to use the U.S. police/military and Christian church for his evil doings, and has failed.  Pictures yesterday showed police officers taking a knee in solidarity with the protestors and the military soldiers hugging men with Black Lives Matter signs.  This had to drive Trump more crazy than he already is -- scary.

Along with the love between the police/military and protestors, many Christian church leaders have recognized Trump's awkward stunt of gassing protestors to clear a spot for him in front of a church for what it was: an attempt to lie White Church Going People into believing that the Black Lives Matter protestors are out to get them.  Why not, such stunts have worked before! NOT THIS TIME BOZO!  Most of the protestors are of the christian faith!

Then, finally, some Republicans are speaking out against Donald Trump: The Dictator.  The best example of this is Susan Collins (R-Maine), who said:  "It was painful to watch peaceful protesters be subjected to tear gas in order for the president to go across the street to a church that I believe he’s attended only once."


And then Sen. Ben Sasse (R-Neb) who said: “There is a fundamental — a constitutional — right to protest, and I’m against clearing out a peaceful protest for a photo op that treats the Word of God as a political prop."

And most glorious of all, the last Christian Right president, George Bush said, "...it remains a shocking failure that African Americans are harassed and threatened in their own country."

And the most telling sign of change, as printed in an CNBC headline:


That's right, Steve King is the guy who recently asked, "When did White Supremacist become a bad word?"

What a dick, and he's gone!  Change is good.

So enjoy your day everyone, keep protesting peacefully with your mask, and vote, Vote, VOTE! this November.