Stand up to Trump or bow to Satan. The choice is yours.

I've been trying to see things positively, but it's so hard.  Everything is so confusing?  In today's headlines for instance, you can read "Why the U.S. Is Not Heading For a Depression" right under another report that says, "We're Already in a Great Depression." Who do I believe? 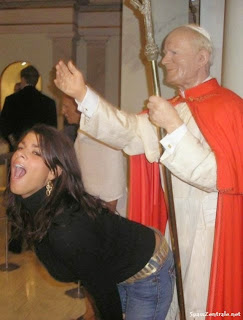 There are no answers.  Trump and his Bozo the Clown Show is giving us no clear advice.  Trump says one thing and does another.  He says we should wear mask in public but never wears one himself.   His own guidelines say we should continue in lock down until 14 days of lowering numbers, which hasn't happened in the cities where he is now supporting the red-neck melitia protestors with a wink.  What chaos!

When I was a Christian, I remember how a preacher told me that chaos is the work of the devil

(1 Corinthians 14:33 - For God is not the author of confusion, but of peace, as in all churches of the saints.).  The Preacher Man was talking about the war protesters who were burning flags and protesting the Vietnam War.  "God doesn't like chaos," he told me and it stuck with me.  I mean, I never liked chaos myself, that's why I became a Buddhist.
I wonder why none of the Christians are saying things about the Chaos Trump is creating by saying one thing and doing another?  Are they... scared?  Have they been eating so much of their Chic-Fil-a For Jesus chicken that they've become... chicken shits?

Stand up to Trump or bow to Satan.  It's that simple ass whole.