NO politics today, I actually chanted for Mike Pence and Donald Trump this morning in that they may get in touch with the Buddha nature in us all.

It is Solitude Day.  This is a time for Wiccans and Neo-Pagans to spend the day (or at least part of it) by themselves, mediate in solitude and reconnect with their "inner selves."  Take a quiet walk in the woods or stroll down a deserted beach and listen to the music of the sea.  Explore an old barn or write a Goddess-inspired poem.

Speaking of poem, on this day in 1892 Walt Whitman died.  It was also on this day in 1874 that Robert Frost was born.  Whitman’s poetry was originally considered little more that smut in some quarters.  According to “On This Date” by Carl M. Cannon, “It wasn’t Whitman's death that changed that view so much as it was that the Civil War toughened Americans’ hides and literary sensibilities....”

Robert Frost not only shared the same birthday as Whitman, but, as Carl M Cannon stated, was another “brawny bard.”  Everyone knows of his “Road Not Taken” poem, but few know that Frost gave us a poem called “Mending Wall” in response to the Russian wall in Berlin meant to keep democracy out.  Some would argue, including this bard, that the wall President Trump is building between Mexico and the US is also designed to keep democracy out.  Only time will tell, here is the poem:

Something there is that doesn't love a wall,

That sends the frozen-ground-swell under it,
And spills the upper boulders in the sun;
And makes gaps even two can pass abreast.
The work of hunters is another thing:
I have come after them and made repair
Where they have left not one stone on a stone,
But they would have the rabbit out of hiding,
To please the yelping dogs. The gaps I mean,
No one has seen them made or heard them made,
But at spring mending-time we find them there.
I let my neighbor know beyond the hill;
And on a day we meet to walk the line
And set the wall between us once again.
We keep the wall between us as we go.
To each the boulders that have fallen to each.
And some are loaves and some so nearly balls
We have to use a spell to make them balance:
‘Stay where you are until our backs are turned!’
We wear our fingers rough with handling them.
Oh, just another kind of out-door game,
One on a side. It comes to little more:
There where it is we do not need the wall:
He is all pine and I am apple orchard.
My apple trees will never get across
And eat the cones under his pines, I tell him.
He only says, ‘Good fences make good neighbors.’
Spring is the mischief in me, and I wonder
If I could put a notion in his head:
‘Why do they make good neighbors? Isn't it
Where there are cows? But here there are no cows.
Before I built a wall I'd ask to know
What I was walling in or walling out,
And to whom I was like to give offense.
Something there is that doesn't love a wall,
That wants it down.’ I could say ‘Elves’ to him,
But it's not elves exactly, and I'd rather
He said it for himself. I see him there
Bringing a stone grasped firmly by the top
In each hand, like an old-stone savage armed.
He moves in darkness as it seems to me,
Not of woods only and the shade of trees.
He will not go behind his father's saying,
And he likes having thought of it so well
He says again, ‘Good fences make good neighbors.’ 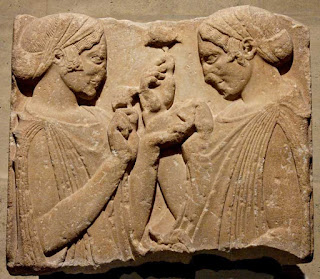 We know the story of Demeter and Persephone: Hades, king of the underworld, lusts after Kore and kidnaps her while she's picking flowers in a sunny meadow.  Refusing to let anything grow until she gets her daughter back, Demeter, the grain mother, makes a deal with Hades that allows Kore -- now called Persephone, "She Who Destroys the Light" -- to return to the upper world.  The story is allegorical.  Vegetation dies for a season.  The Eleusinian Mysteries perhaps revealed the mysteries of life and death contained in a seed.

In Lost Goddesses of Early Greece, Charlene Spretnak retells an earlier version of the story, without the rape.  Humankind lives in a happy land of perpetual spring.  Grain and flowers are ever growing, ever blooming, and no one has a care in the world.  One day Persephone hears whispering in the meadow.  It seems to be coming from beneath the roots of the flowers and grass.  She investigates and discovers that she's hearing the whispers of the dead, who exist in a half-life in a shadowy place under the earth.  She feels sorry for them and, talking three poppies and three sheaves of wheat, she descends under the earth.  She tells the dead souls that she has come to be their comforter and their queen.  After she paints their foreheads with the juice of the poppy to initiate them into new life, they are ready for rebirth.

Reader, instead of seeing pale Persephone on her dark throne, let's build a new picture in our minds.  Let's see young Persephone sitting among the shades of the dead -- alone. She's telling them stories and singing to them.  She's holding their hands, caressing their cheeks, reminding them of the joys and sorrows of life.  When they're ready, she sends them back up to the land of the living (Andinger - Pagan Every Day pg86).

Comparative folklorist Joseph Campbell once wrote, "Read myths.  They teach you that you can turn inward, and you begin to get the message of the symbols."  Born in New York City on this day (March 26th) in 1904, Campbell gained fame for his 1948 book The Hero with a Thousand Faces, which studied the archetype of the hero in Native American, Greek, Hindu, Buddhist, Mayan, Norse, Biblical, and Arthurian legends.  His concepts were intricately woven into film director George Lucas's scripts for the "Star Wars" trilogy.  Campbell's multi-volume Historical Atlas of World Mythology was only partially completed by the time of his death in 1987.

Joseph Campbell was a Pagan.