Trump: Mother Earth Is coming for you! 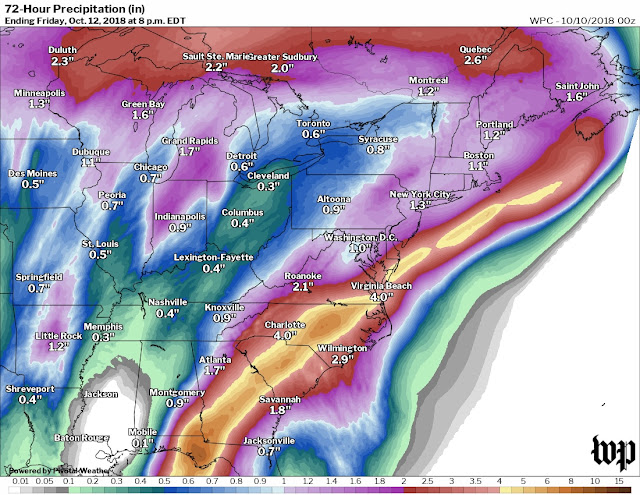 Another hurricane headed for Washing DC because the idiots there refuse to see that climate change is real, and according to recent reports, if we don't do anything within ten years to address it, like stop being so greedy and voting for idiots who deny global warming, WE'RE ALL GOING TO DIE!

First, my wishes and prayers go out to those in the path.  Good luck.

If you look at the mad, however, just like the last storm, it ends up going through Washing DC on the way out, the home of Donald Trump: the greatest Global Warming Denier of them all.

The Dire Warnings of the United Nations’ Latest Climate-Change Report

Last night, in Incheon, South Korea, after a week of deliberation, the I.P.C.C. released the new findings. The summary tells a nightmarish tale—one much worse than any of those in the I.P.C.C.’s previous reports—surveying the climate-change impacts we’re already experiencing with one degree of warming, and the severity of the impacts to come once we surpass 1.5 degrees of warming. Ten million more people would be exposed to permanent inundation, and several hundred million more to “climate-related risks and susceptible to poverty.” Malaria and dengue fever will be more widespread, and crops like maize, rice, and wheat will have smaller and smaller yields—particularly in sub-Saharan Africa, Southeast Asia, and Central and South America. Security and economic growth will be that much more imperilled. “Robust scientific literature now shows that there are significant differences between 1.5 and 2 degrees,” Adelle Thomas, a geographer from the Bahamas and also one of the report’s lead authors, told me. “The scientific consensus is really strong. It’s not just a political slogan: ‘1.5 to stay alive.’ It’s true.”

1. "The concept of global warming was created by and for the Chinese in order to make U.S. manufacturing non-competitive."
2. "It's freezing and snowing in New York -- we need global warming!"

3. "It's freezing outside, where the hell is 'global warming'??"
4. "I wonder if the Rutgers coach who had the audacity to yell at the player is a proponent of global warming?"
5. "We should be focused on magnificently clean and healthy air and not distracted by the expensive hoax that is global warming!"
6. "Wow, it's snowing in Isreal and on the pyramids in Egypt. Are we still wasting billions on the global warming con? MAKE U.S. COMPETITIVE!"
7. "Ice storm rolls from Texas to Tennessee - I'm in Los Angeles and it's freezing. Global warming is a total, and very expensive, hoax!"

8. "Give me clean, beautiful and healthy air - not the same old climate change (global warming) bullshit! I am tired of hearing this nonsense."
9. Obama said in his SOTU that 'global warming is a fact.' Sure, about as factual as 'if you like your healthcare, you can keep it.'"
10. "When will our country stop wasting money on global warming and so many other truly "STUPID" things and begin to focus on lower taxes?"
11. "It's late in July and it is really cold outside in New York. Where the hell is GLOBAL WARMING??? We need some fast! It's now CLIMATE CHANGE"
12. "Just out - the POLAR ICE CAPS are at an all time high, the POLAR BEAR population has never been stronger. Where the hell is global warming?"

13. "It's really cold outside, they are calling it a major freeze, weeks ahead of normal. Man, we could use a big fat dose of global warming!"
14. "Wow, 25 degrees below zero, record cold and snow spell. Global warming anyone?"
15. "Record low temperatures and massive amounts of snow. Where the hell is GLOBAL WARMING?"
16. "I believe in clean air. Immaculate air. But I don't believe in climate change."
17. "I'm not a believer in man-made global warming. It could be warming, and it's going to start to cool at some point. And you know, in the early, in the 1920s, people talked about global cooling...They thought the Earth was cooling. Now, it's global warming...But the problem we have, and if you look at our energy costs, and all of the things that we're doing to solve a problem that I don't think in any major fashion exists."

18. "Well, I think the climate change is just a very, very expensive form of tax. A lot of people are making a lot of money. I know much about climate change. I'd be—received environmental awards. And I often joke that this is done for the benefit of China. Obviously, I joke. But this is done for the benefit of China, because China does not do anything to help climate change. They burn everything you could burn; they couldn't care less. They have very—you know, their standards are nothing. But they—in the meantime, they can undercut us on price. So it's very hard on our business."
19. "I'm not supposed to be using hair spray. But think of it. So Obama's always talking about the global warming, that global warming is our biggest and most dangerous problem, OK?"