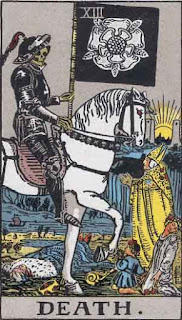 The most misunderstood card in the Tarot is the 13th card of the Major Arcana, Death, which rarely is to be taken literally but generally signifies a letting go of the past in order to grow beyond limitations, metaphorically.


On this day in 1547, however, it was literal.  The Tutor poet and soldier Henry Howard, Earl of Surrey and son of Duke Thomas Howard of Norfolk, was sentenced to death by the court of King Henry VIII.  The king was paranoid of the young Surrey and feared that he might threaten his crown, and so had him arrested on trumped-up charges.   Three days later, the poet was beheaded.

Howard was originally arrested for questioning for his slandering of the royal council, but when that didn't stick, they got him for displaying his royal arms and insignia and thereby threatening the kings title.

It really didn't take much to get hung back then, did it?

Ironically enough, Howard would be beheaded a few days later on January 19, 1547; it would be King Henry VIII's last murder, for the beloved king would die from health issues tied to being obese and possibly having syphilis, on January 28th of that same year.

Besides having a bloodline to the Holy Grail, Howard is credited with inventing the English Sonnet as we know it.   Here is a most curious poem of his.


Alas, so all things now do hold their peace
-- Henry Howard, Early of Surrey

Alas, so all things now do hold their peace,
Heaven and earth disturbèd in no thing;
The beasts, the air, the birds their song do cease,
The nightès car the stars about doth bring;
Calm is the sea; the waves work less and less:
So am not I, whom love alas doth wring,
Bringing before my face the great increase
Of my desires, whereat I weep and sing,
In joy and woe, as in a doubtful case.
For my sweet thoughts sometime do pleasure bring:
But by and by, the cause of my disease
Gives me a pang that inwardly doth sting,
When that I think what grief it is again
To live and lack the thing should rid my pain. 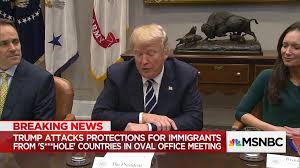 Although he is backtracking now, well, strike that: he is outwardly lying to us again about something he said, the facts are in and Donald Trump did say,


“Why are we having all these people from shithole countries come here?”

He said it and even the Republicans who were there are admitting it.  Sir Donald ?Trump was talking about Haiti, El Salvador, and the African countries.

The press seems to be surprised by this,  and I'm thinking, this is the same guy who called  John McCain, a US war hero, an idiot for having been captured as a POW in the Vietnam War; then Trump was quoted as saying he rapes woman at will because of his position in life; and finally, made fun of a reporter with a physical handicap.