Many years ago, I saw a TV documentary on the brain.  Some animals may be as smart as human animals, the experts said, but they don't have language.  We can't understand their languages, I thought, so we don't know the extent of their intelligence.

At one point in the program, a researcher at The Famous Primate Laboratory picked up a little rhesus monkey hardly bigger than the man's hand and talked about simian intelligence.  Then, to show us its brain, he snipped its head off.  Just like that: I can still see the little monkey's eyes.  I was only marginally aware of People for the Ethical Treatment of Animals (PETA), so I sent out a prayer to Jane Goodall.

As a child, Goodall was inspired by Tarzan and The Jungle Book.  She later worked with Louis Leakey, the paleontologist who discovered some of the oldest human remains in Africa.  She's best known for her work with the chimpanzees in Gombe.

We know that chimpanzees differ from us in the structure of their DNA by just over one percent and that their blood chemistry and immune systems are similar to ours.  We know that animals, both domestic and wild, have intelligence.  We know they have souls.  We shouldn't cut their heads off.

In 1977, Goodall established the Jane Goodall Institute for Wildlife Research, Education and Conservation.  "Young people around the world," she writes, "can break through...the brick walls of overpopulation, deforestation, soil erosion, desertification, poverty, hunger, disease, pollution...and human greed."  When she travels, she carries a stuffed chimpanzee named Mr. H.  When people come up to talk to her, they touch Mr. H.  These people, she says, give her reason for hope.
(Ardinger, B., Pagan Ever Day,  pg94) 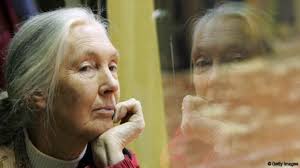 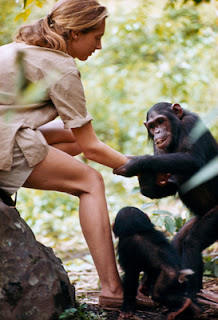 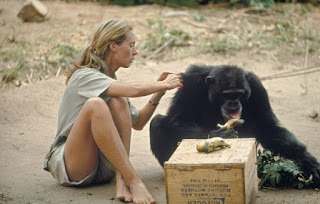