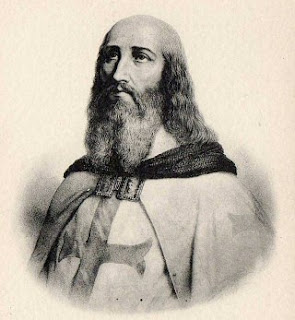 March 11th has arrived, and what you should know about this day is that it is the day the last Grand Master of the Order of the Knights Templars, Jacques de Molay, died. Yes, he was burned alive at the stake on this date in the year 1314.  Shortly before he died, however, he accurately predicted the death of King Philip IV of France within the year and the death of Pope Clement V within forty days.

The original Templars were founded in the 12th Century to guard pilgrims on their way along the dangerous roads that led to Jerusalem. Its members were effectively armed monk-like knights who were granted certain legal privileges and whose status was backed by the church. They were reputed to be the possessors of great wealth and power. 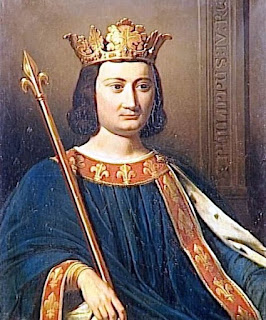 In 1306, King Philip IV expelled all Jews from France, seizing their property and confiscating the monies owed to them. Philip’s devotion to St. Louis was witnessed that same year by elaborate ceremonies in his honor, and Louis’s anti-Semitic proclivities might have inspired Philip to act against the Jews, whose usefulness as a source of regular revenue had in any case been exhausted by his earlier repeated impositions.

Feeling his oats from his successful removal of the Jews, King Philip then attacked the Knights Templars, the wealthy, powerful, independent crusading order that had long acted as the French monarchy’s financial agent. Philip’s newfound interest in uniting the crusading orders made him mistrustful of the Templars’ opposition to such plans. Thus, he was receptive to charges of heresy and sodomy presented against them in 1305, and so in September 1307, he ordered the seizing all Knights Templars in France.

Pope Clement V (1264 – April 20, 1314), born Bertrand de Goth (also occasionally spelled "Gouth" and "Got"), was Pope from 1305 to his death. He is memorable in history for suppressing the order of the Templars. He was Philip IV The Fair's personal choice for Pope, and more or less served Philip's interests.

On October 13, 1307, came the arrest of hundreds of the Knights Templar in France, an action apparently financially motivated and undertaken by the efficient royal bureaucracy to increase the prestige of the crown. Philip IV was the force behind this ruthless move, but it has also tarnished the historical reputation of Clement V. From the very day of Clement V's coronation, the King had charged the Templars with heresy, immorality, and abuses, and the scruples of the Pope were compromised by a growing sense that the burgeoning French State might not wait for the Church, but would proceed independently. Clement was initially slow to respond to these charges and "with considerable courage … refused to give the king an answer … at once." He tried to "fend off" Philip's "demand for an inquiry" until Philip ordered the arrest of all members of the order. Clement interpreted this as an attack on the Church itself, and issued a bull ordering the "kings of the Christian lands … to arrest the Templars in their countries" but to do so in the name of the Pope. Clement may have hoped that the Templars' innocence would be proved, so yielded to the King's pressure to move against them. However, charged with heresy, sodomy, and all manners of abominations, they were, despite Clement's delaying tactics, eventually found guilty. Clement tried to avoid taking personal responsibility by sending a delegation of Cardinals to Paris to interrogate the prisoners.
In 1311, Council of Vienne was convened to pass judgment. Most of its 300 members thought the charges unproved but Philip himself testified to the order's guilt. Then, the Bull Vox in excelsis, dated March 22, 1312, written by Clement, was read. In this Bull, "the pope said that though he had no sufficient reasons for a formal condemnation of the order, nevertheless, because of the common weal, the hatred borne them by the King of France, the scandalous nature of their trial, and the probable dilapidation of the order's property in every Christian land, he suppressed it by virtue of his sovereign power, and not by any definitive sentence." Many of the knights were executed, and the order's wealth was confiscated. Although the order's assets were meant to devolve to the Hospitallers, they were appropriated by Philip. The guilt or innocence of the Templars is one of the more difficult historical problems, partly because of the atmosphere of hysteria that had built up in the preceding generation and the habitually intemperate language and extravagant denunciations exchanged between temporal rulers and churchmen, and partly because the subject has been embraced by conspiracy theorists and pseudo-historians.

King Philip’s stubborn resolve to defend morality and the faith was shown when, with royal acquiescence, the grand master of the Templars, Jacques de Molay, was burned at the stake after retracting his earlier confession.

Clement V died in April 1314. According to one story, while his body was lying in state, a thunderstorm developed during the night and lightning struck the church where his body lay, igniting the building. The fire was so intense that, when it was extinguished, the body of Pope Clement V was almost completely destroyed. He is buried at La Chaise-Dieu in Auvergne.

The death of Clement V was a blow to King Philip.   Shortly after hearing of this death, the king had a minor stroke. Having regained strength, he travelled to his birthplace, Fontainebleau, and there, a day before his death, he halted collection of his last tax and provided for a crusading expedition to be conducted in his name.

We now return you to your normal broadcasting. 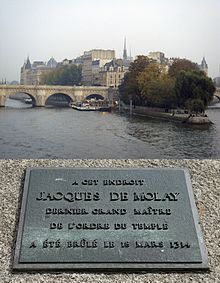