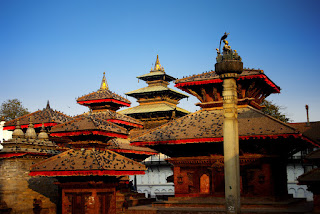 Each year on or around January 31, a sacred festival is held in the Katmandu Valley of Nepal in honor of the goddess Sarasvati, an ancient Indian deity who presides over all forms of education.  At temples dedicated to her, offerings of food, flowers, and incense are made by fiathful Hindus and students who seek her help on their school exams.  In the courtyard of the Januman Dhoka, an ancient palace where the king is accompanied on this day by Napalese officials, the annual rites of Spring begin with a traditional gun salute, followed by veneration ceremonies which are performed by the royal priest.

So begins our quick journey of Katmandu Valley.   Once, a great lake 30,000 YEARS AGO:


This panorama by Dinesh Shrestha, taken from Lakuri Bhanjyang in 2008, was manipulated to visualise what the Kathmandu Valley must have looked like when it was a huge lake.

Kathmandu Valley is where mythology and geology intertwine. The former holds that the Tibetan saint, Manjushree, flew down to Kathmandu. Upon seeing the huge lake, he cut the Chobhar ridge in half with his mighty sword and drained the waters to allow civilisation to flourish in the fertile sacred valley.

In days of yore, in vedic times when the gods were young, when the Kathmandu Valley was a wild jungle, in Mrigasthali above the banks of the Bagmati, the sky-god Prajapati was intent upon copulation with his daughter Ushas, Goddess of dawn. Mahadeva in his wild and dangerous form of Rudra, the hunter, interrupted Prajapati's incestuous activity by shooting arrows at him. A lingam arose on that spot representing Siva as Pashupatinath, Lord of Beasts.

A later legend tells of a time when Siva Mahadeva as Vishvanath Baba was overwhelmed by the adulation of his devotees in Kasi, Banares. Fleeing from Banares, Mahadeva transformed himself into a gazelle and lived in peace on the Mrigasthali hill. Visnu, Brahma and the other gods, unable to tolerate Mahadev's absence from Banares, came to fetch him back. They caught the gazelle by the horn, but in so doing the horn broke. Thereupon Siva declared himself Pashupati, Lord of Beasts, and Visnu erected the broken horn as the original Pashupati lingam and all the gods worshipped it.
Much later, the first human being to walk the forests of the Valley was called Ne, the progenitor of the Nepali people.

None the less, I think I'm going to Katmandu, that is, if I ever get out of this place.