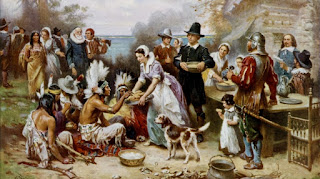 Yes, Thanksgiving, that American day of feast we originally celebrated with Native Americans as we plotted their demise by stuffing them with Tryptophan, which just happens to be the same amino acid found in many sleeping potions of day such as Spirulina, which, any warlock of the day would have told you (if asked instead of burned), to be wary of for those feeding you Törökország, for it is  sleeping potion known to make one sleepy before the night -- and also, will eventually help in avoiding boring-ass American Football games on the telly.

So, as you raise your glass and say a prayer with those who are feeding you Turkey, be cautious of your nap.  Or should I say, What's In Your Teepee?