It is Christmas morning and what better time to write about this most wonderful time of year where even the greediest of the greedy are forced to place the words "Peace" and "Joy" in their store fronts.  Some call it "Christmas" others "The Holidays" and a few of us, "The Winter's Soltice." Whatever the title, the Christian's believe they own it as they do all the other scared sights of ours they have buried over the years; and so, I feel I must give onto Caesar that which is his:  “Christology.” 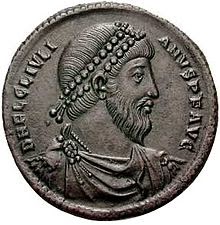 First, if you belief Christ is more than a distorted recount of history used to gain power in the world, then you are probably reading the wrong blog.  I for one, however, do believe that this “Christ” thing you speak of is a phase to which is finally coming to an end and once it does, we will return to the ancient wisdom we all know is in us.  I base this reasoning on a few things, but for time sake, I will narrow it to one: it was around 331/332 AD that the world had its last Pagan leader (Emperor Julian of Rome) and how since this time the Christian church slowly stripped us of the knowledge and powers we once had which gave us the world of poverty and illiteracy which we are only now fully understanding.  Hence, I bring you the true meaning of Christmas: Christology.

The first Christology was developed by Paul, one of Jesus’ twelve apostles.  Paul conceived of Jesus as the Christ, a pre-existent divine being who had descended into man to save humankind from the powers of law, sin, and death.  The resurrected Christ was raised up to sit at the right hand of God, and would return at some point in the future to judge humankind.

Since the time of Paul, innumerable Christologies have been conceived.  They are complex and their history has been fraught with controversy.  Early Christologies focused on Jesus as the incarnation of Logos (God or the Ultimate Reality) and not as the historical man.  Christological controversies of the Patristic Age (which concerns the lives, writings, and doctrines of the Fathers of Christianity) usually focus on the questioning of the humanity and/or divinity of Jesus.  These included Gnosticism as the major christian deviation in the second century, from which evolved Docetism, which held that Christ only appeared to be human.  Arianism denied that the divinity of Jesus preexisted as the Son of God.  Apollinarianism held that preexisting divinity replaced the human spirit of the human Jesus.  The church denounced such teachings as heresies, usually by statements from formal councils.

Christologies of the Middle Ages, Renaissance, and Reformation placed great emphasis on the meaning of Christ’s passion and crucifixion.  During the Enlightenment in the eighteenth century, Jesus came to be regarded as a moral teacher; and in the nineteenth century interest returned to the historical Jesus.  More modern Christologies examine both the historical Jesus and Jesus as the absolute bringer of salvation and, in his death, the definitive Word of God.  Some modern Christologies start “from below” rather than “from above,” finding Jesus first to be truly human, and then discovering his divinity in and through his humanity.

Lively debates center on the “dilution” of Christian orthodoxy by liberal theologians in America.  Michael Dummet at Oxford points to an apparent consensus among teachers of Catholic theology in American seminaries that Jesus died without believing that he was Christ of the Son of God; that he knew nothing of the Trinity; that he knew from his mother who his natural father was; that he taught the imminent arrival of a messianic figure called the Son of Man but never claimed that this was himself.  They are teaching, Dummet observes, that when Jesus died, his body remained in the tomb and decomposed there.

Newer Christologist indicate less emphasis on biblical sources and more importance being given to scientific, psychological, and social considerations.  Modern Christologies undoubtedly will respond to the renewed interest in mythology, such as developed by Joseph Campbell...

So, as you can see, Christ is a moving target, and in a few years, after it is proven that there are other forms of beings in the universe, I’m sure Christ will be claimed as the driver.  What really sucks, is the only proof we have is he was a very Zen guy.