The government office investigating UFOs in Chile has released an analysis of two high quality photos showing what appear be genuine unidentified flying objects above a copper mine in that country.  They actually have a committee who studies this shit:  The Committee for the Studies of Anomalous Aerial Phenomena (CEFAA).  It is responsible for the analysis of selected reports of unexplained aerial phenomena in Chilean airspace, most of them from pilots and aviation personnel. 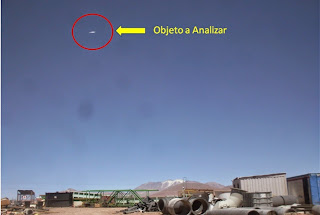 The photos were taken at the Collahuasi copper mine, more than 14,000 feet above sea level in the Andean plateau in the far north of Chile. An extremely remote location with low oxygen levels and unusually clear skies, the area is desolate and inhospitable. The Collahuasi mine produces copper concentrate, copper cathodes and molybdenum concentrate from three open-pit mineral deposits.

Four technicians - professionals specializing in electricity, electronics, and fluid control - were working there in April, 2013. They witnessed a disc-shaped object which approached slowly and was present for more than an hour, moving around in different positions and hovering at about 2000 feet. One technician took pictures with his Kenox Samsung S860 camera. The strange object made no sound, and eventually moved away towards the East. 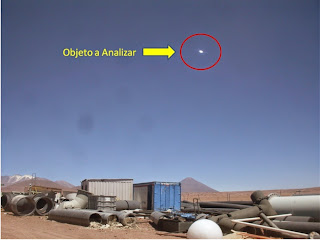 The witnesses decided not to tell anybody because of the negative associations they had with UFO sightings, and therefore had every intention of always keeping the sighting private. But some months later, the photographer casually showed the pictures to the chief engineer at the mine, who asked for copies. The engineer sent the images to the CEFAA and provided the agency with information reported to him by the witnesses. He too has requested anonymity.

The report states that the witnesses described the phenomenon as "a flattened disc, of brilliant color, with a diameter of 5 to 10 meters [16 to 32 feet].  It performed ascending, descending and horizontal movements in short lengths, about 600 meters above the ground." The witnesses had the impression that the object was under intelligent control. 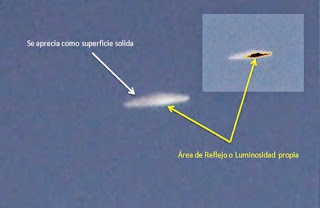 The first image, enlarged and filtered, shows a solid object reflecting the sunlight, the report states. It adds that the object could be emitting it's own energy as well, due to the high temperature shown in the image (the black area).

The study concludes that "It is an object or phenomenon of great interest, and it can be qualified as a UFO."