Get ready boys and girls, hard times are coming from the Trump-Eugenics Party 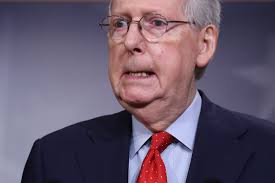 Far be it for me to say something bad about Donald Trump, I mean, as you know I've been avoiding bad news by watching bubble sports.  Still, I fear that my voice is needed.  My factual voice in a very non-factual time.

Right now things are bad.  The Republicans I used to call Neo-Cons are now considered liberals.  This is how far right we have swung.  Last night, Mitch McConnell swore in another 6 Right Wing judges.  They've almost done it.  They've almost destroyed the world as we know it to give us their conservative vision of a country without social programs for the poor, and crazy-low tax rates for the rich.  For those of us in the know we know that the rich conservatives believe they are God's chosen people.  They believe God has blessed them with their richness.  The slaves who worked their great grandparents plantations, or the wage earners who worked in their factories, are losers.  In other words:  rich is heaven's gift, poverty is heaven's judgement on those not worthy.  Social Programs to the rich are: get on your knees and pray to me for a dime, and I'll consider it. That's why they really hate social security and lunch programs for the poor.  They don't like the idea of me and you having something we didn't get from busting our backs making them a profit.

This thought process started with Eugenics and is now the new Donald Trump party in the USA which I call the Trump-Eugenics Party.

In case you've forgotten, Eugenics advocated selective breeding.  That's right, the more Aryan blood, the mo' better.  Problem is, before the 19th century there was no such thing as an Aryan race; instead, there were  groups of warring tribes taking things from each other.  The tribe with the best fighters and biggest ships, took things.  This had nothing to do with smarts and everything to do with resources, aggression, and stupidity.  Stupidity because they couldn't see that there was plenty to go around if you didn't have the gluttonous types wanting way more than they needed.  Yes, a socialistic government.

This is clear to see to most people and this is why Mitch McConnell is swearing in conservative judges to back them up when the socialist revolution begins and those of us who don't get in line with their greed and hate policies are arrested and sentenced to where all good liberals are headed: prison -- if not there already.  They know it is happening.  This is why Donald Trump has to remain president no-matter what.  A fair election will turn the USA into a Democratic Socialist State.  One where gluttonous behavior is not rewarded, but considered a sin.  A good old-fashion biblical sin.

Get ready boys and girls, hard times are coming, for a short while, but then better days are here and they know it.  Stay strong.