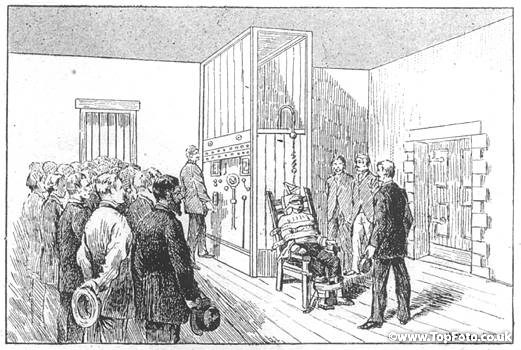 On this day in 1890 the first execution by electrocution is carried out at the Auburn Prison in New York on William Kemmler.  Electricity was still a new thing at the time for there really wasn’t much use for it until Thomas Edison found a way to make it into light in 1879.  Electricity had been around since Benjamin Franklin experimented with his magic key and lightening — can I get an Amen, Benjamin Franklin was one of the few Framers of the US Constitution who fought against slavery most of his life by being a member of the Abolition of Slavery movements, and I support the BLM but also want to recognize those who did the best they could to end it in the past. — getting back to electricity: it was relatively new in 1890 and the 1%ers needed a way to make money off of it and so found a way to use it in law enforcement as quickly as possible.  That’s right, just as today, the Police State was a profitable business and still is.   So, when you hear “Defund the Police,”  it is this kind of shit we are talking about.  Also, I have to add that the company who supplied the electricity was Westinghouse and the owner, George Westinghouse, opposed his product being used for murder.  A lawyer filed an appeal claiming the electric chair violated the Eighth Amendment’s prohibition of cruel and unusual punishment, but of course, there’s no stopping murder when it is sanctioned by the government.  Funny, but George Westinghouse’s consciousness for not using electricity for murder would alarm the other business leaders in the country that Westinghouse had a heart, a sign of weakness, and so they ruined him: George Westinghouse would lose everything over the next twenty years.  That’s how it works with BAD capitalism: you can’t have a heart, you can’t be kind, you can’t do the right thing and have crazy profits.  The two don’t go together. That’s the problem with today’s “Bad Capitalism,” and why if the Bad Capitalist don’t join the human race and change their ways, we are going to have to find another form of government.  I for one am still on the Good Capitalist bandwagon for now; you know, the Ben & Jerry capitalism where profits are divided more equitable, and the top guys and gals still make a shit load of money, but the bottom guys and gals make a decent living too!  what a f**king concept!!!

And now for something completely different, I want to talk with you today about animal cruelty and point you to PITA to make a donation.  We need to stop this shit now!  Here are some recent examples of bad pet owners.  If this doesn’t get you to open up your wallet and donate money I don’t know what will: