On this day in 1773 the British Parliament passes the Tea Act, giving the East India Company a monopoly on the American tea trade.  Seeing this as another example of taxation tyranny, colonist later organized the Boston Tea Party--an early act of defiance in the American independence movement.

Another act of defiance happened on this day in 1961 when president John F Kennedy warned us of a "Secret Society" that wants to control things behind the scenes.   Isn't it ironic that he gave this speech to the Newspaper Publishers Association in New York city?  Why did he give this to the press?  Whatever the reason, there is no doubt that our free press is under an assault with the likes of Hate Radio Lies, Fox Right-Wing News, and Donald Trump calling anything he doesn't agree with as "fake news" and 30's of the voting public agreeing with him.   The Republicans know they have been playing with fire since the days when Rush Limbaugh was allowed to get away with all the lies and hate and then Fox News slanting everything to make them look like Angels and Democrats, Devils.  At first, these lying bastards were funny, but now they have us chasing our own tails wondering what is true.   If there is a Secret Society, isn't that the way they want it?

I for one still believe truth will come, and hopefully soon.

“The very word "secrecy" is repugnant in a free and open society; and we are as a people inherently and historically opposed to secret societies, to secret oaths and to secret proceedings. We decided long ago that the dangers of excessive and unwarranted concealment of pertinent facts far outweighed the dangers which are cited to justify it. Even today, there is little value in opposing the threat of a closed society by imitating its arbitrary restrictions. Even today, there is little value in insuring the survival of our nation if our traditions do not survive with it. And there is very grave danger that an announced need for increased security will be seized upon by those anxious to expand its meaning to the very limits of official censorship and concealment. That I do not intend to permit to the extent that it is in my control. And no official of my Administration, whether his rank is high or low, civilian or military, should interpret my words here tonight as an excuse to censor the news, to stifle dissent, to cover up our mistakes or to withhold from the press and the public the facts they deserve to know. For we are opposed around the world by a monolithic and ruthless conspiracy that relies on covert means for expanding its sphere of influence--on infiltration instead of invasion, on subversion instead of elections, on intimidation instead of free choice, on guerrillas by night instead of armies by day. It is a system which has conscripted vast human and material resources into the building of a tightly knit, highly efficient machine that combines military, diplomatic, intelligence, economic, scientific and political operations. Its preparations are concealed, not published. Its mistakes are buried not headlined. Its dissenters are silenced, not praised. No expenditure is questioned, no rumor is printed, no secret is revealed. Without debate, without criticism, no Administration and no country can succeed-- and no republic can survive. That is why the Athenian lawmaker Solon decreed it a crime for any citizen to shrink from controversy. And that is why our press was protected by the First (emphasized) Amendment-- the only business in America specifically protected by the Constitution-- not primarily to amuse and entertain, not to emphasize the trivial and sentimental, not to simply "give the public what it wants"--but to inform, to arouse, to reflect, to state our dangers and our opportunities, to indicate our crises and our choices, to lead, mold educate and sometimes even anger public opinion. This means greater coverage and analysis of international news-- for it is no longer far away and foreign but close at hand and local. It means greater attention to improved understanding of the news as well as improved transmission. And it means, finally, that government at all levels, must meet its obligation to provide you with the fullest possible information outside the narrowest limits of national security... And so it is to the printing press--to the recorder of mans deeds, the keeper of his conscience, the courier of his news-- that we look for strength and assistance, confident that with your help man will be what he was born to be: free and independent.”


Funny, or is it?  That on this date in 1898, Albert J. Beveridge ("Beveridge the Brilliant") gave his famous speech stating that the US should go to war with anyone we wanted to in the pursuit of profits.  On this very same day in 1927,  he died.

So who was this masked-man anyway?  Well, he was a prominent Imperialist of his day.   He also campaigned for a new Navy that was designed not to protect the US, but to take over other countries that weren’t white because he truly believed that people-of-color were inferior.  In 1901, Beveridge became chairman of the senate committee on territories, in which he argued against statehood for New Mexico and Arizona because they contained too large a population of Hispanics and Native Americans, who Beveridge believed were ungovernable. 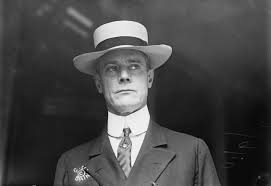