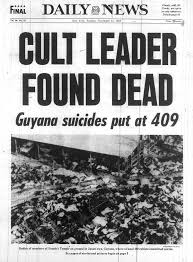 The California State Senate capped off a rather heady year for the Reverend Jim Jones--one that began with his designation as "Humanitarian of the Year" by the now defunct Los Angeles Herald Examiner--by adopting a resolution on October 18, 1976, commending Jones and his Peoples Temple congregation "for their exemplary display of diligent and devoted service to and concern for their fellow man, not only in this state and nation, but throughout the world."  Just over two years later, the great "humanitarian" would oversee the mass murder-suicide of more than 900 of his cult followers in Jonestown, Guyana.
(Bad Days in History pg.373)