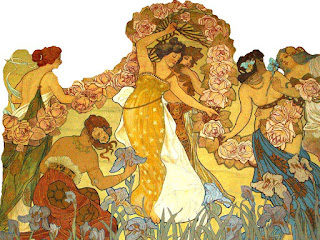 The Hilaria (Festival of Joy) was celebrated annually on this date in ancient Rome.  It was a joyous event which commemorated the triumph of day over night after the Vernal Equinox.  The festivities were brought to a close with a "ceremony of washing" which was believed to promote fertility.

On a day like today, more or less, the archangel Gabriel came down from heaven and the Virgin Mary learned that the child of God was living in her womb.
Relics of the Virgin are now worshiped in churches all over the world:
the shoes and slippers she wore,
her nightgowns and her dresses,
hairnets, diadems, combs,
veils and locks of hair,
traces of the milk that Jesus sucked
and her four wedding rings, even thought she married only once.

Conspiracy theorists are claiming to have discovered proof of time travel after finding evidence of ancient statues holding what looks like modern-day designer handbags. Conspiracy theory website UFO Today has released a YouTube video called "The Secret of the handbag in ancient stone carvings and statues - Ancient Aliens?"

Cactus On The Wall Poem

Cactus on the wall, Who’s the fairest of them all? Is it you, the wall, or me? Who cries to be free? Before we were here, The wall w...

tvboogie
I'm not sure if they are Lizard People, Greys, Dark Gods or what, but they are everywhere. I fear that they might be allowing us to over populate so they can use the same logic to kill humans that hunters use to kill deer: If we don't hunt them they will over-populate and starve. I'm not sure if they want to use us for food, workers, fuel, or what, but their plan is a dark one, and unstoppable if we continue to deny what we are seeing in the skies.... I could go on, but I'll stop there. DR.TVboogie is a doctor of truth, and this is his blog. Peace Out.